I am not writing this blog to scare anyone or to put you on edge as a new parent but more so to raise the awareness.

I would hate for any other parent to go through what we went through.

As you may have read my previous blog, you would know that recently our baby girl had an anaphylactic reaction to something in her breakfast.

This was not a new breakfast, she had all the foods many times before including baby rice cereal banana and peanut butter.

As any parent, I assumed since she had these foods before she would be absolutely fine and enjoy it as she always did.

But that was not the case.

Unfortunately Arabella had a severe reaction to one of those foods that she had previously had.

We recently had Arabella allergy tested, confirming that she is anaphylaxis to both peanuts and egg, egg being another food she has tried a few times before and never had a reaction.

As you can imagine this was a huge shock to me since she had never had a reaction when trying these foods before.

Upon further research and communication with our allergy specialist it turns out that children can develop an allergy later in life, or after trying a food even after several times.

He also suggested that the allergy could have been developed as a result of the virus that she had at the time meaning her immune system was lower than usual. Arabella was confirmed with rhinovirus and adenovirus a few days prior to me giving her this breakfast.

Again, I do not write this to scare you as a new parent if you are getting ready to try your baby on solids, instead I want to raise the awareness.

Every time you feed your child, please just keep your eyes open for any signs that may be different to usual.

If your child becomes irritable, is crying unusually, breaks out in a rash that is unusual, is showing signs of struggle to breathe, has any swollen features especially on their face, or any other signs that don’t seem usual to you please call 000 just to be on the safe side.

Don’t be worried, Just be aware. 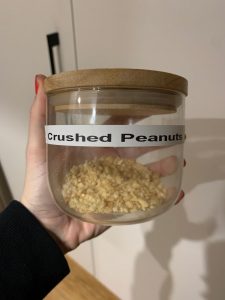 Time for us to dispose of all allergy foods from the house.